The 100% Country Club is any country in our Squash Players App database where, for every squash venue in that country, we know how many squash courts are at those venues.

Why do we care?

We boast that our app contains the biggest and best global database of squash venues on the planet. (This is largely thanks to crowdsourcing efforts with the global squash community – Thank you! Please keep going!)

Clearly it’s not JUST about tracking down and recording all the squash venues in the world. It’s also about adding more detailed information and useful about these venues, over and above what we can glean from Google Maps and other ‘smarts’ that our systems use.

We propose that the next most important thing to know about a squash venue is how many courts it has. This is helpful for an individual player to know in advance of trying out a new venue. It’s also helpful in aggregate, i.e. to measure the total number of courts in a geographical area (e.g. a country) as a proxy for the overall health of the sport. Increasing numbers of squash venues AND squash courts means more opportunity for the players to play, for the game to grow.

Knowing court numbers also helps to give us some informative stats such as:

Naturally the end game (WITH YOUR HELP!) is to have ALL the squash courts in the world accounted for. This will mean that 100% of countries will be members of the 100% Country Club. Which admittedly doesn’t make it sound quite so exclusive anymore! 🙂

Below is a screenshot of all the 30 current members of the 100% Country Club.

Remember – it’s quick and easy for any member of the Squash Players App (free from the Android and Apple app stores) to improve the data for ANY venue on the planet. Just do it. And thanks! 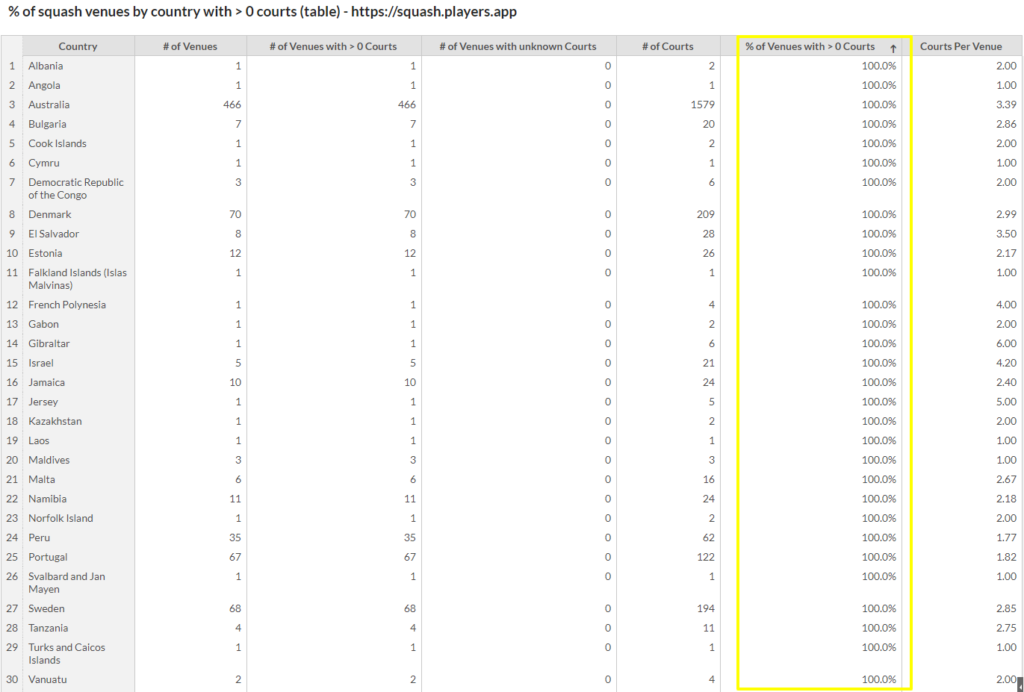